Systemic Racism in the Education System

You are here:
Culturally Responsive Teaching 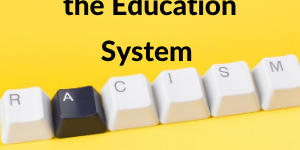 It seems that, just about every other day, a new video is released of an unnecessarily violent police altercation, or of an irrationally angry shopper slinging slurs in the produce aisle, or of a certain individual touting a certain symbol a little too proudly. While these instances are infuriating, it’s important to note that they aren’t just racist anomalies, but natural consequences of the hate and discrimination that plays and has always played an integral roll in our societies. These unsettling and often tragic recorded events are manifestations of systemic racism, a plague that not only affects our supermarkets, but every other part of our lives as well, including our education system.

Brown v Board of Education may have legally desegregated schools, but the racism and systemic inequalities present in the education system today transcend legislation and span from implicit individual biases to fundamental economic injustices.

Bias from the Beginning

While the 1954 Supreme Court decision might tell one story of anti-racist progress in the United States education system, even recent statistics and studies can tell a completely different story altogether. As early as preschool, Black children can experience discrimination before they even know what the word means. Research published in the Journal of Personality and Social Psychology shows that Black children are not only often perceived as older than they really are, they are perceived as less innocent.

These findings aren’t just fundamentally unsettling, they have very real and troubling manifestations. Data shows that Black preschoolers are suspended disproportionally more than their white classmates. This inherit, disproportionate, racist, increased suspicion of Black children goes far beyond preschool. It shows up everywhere, from TIME’s infamous darkening of O.J. Simpson’s skin tone to make him “look guiltier” to, of course, the K-12 education system.

As children get older, the consequences Black children face as a result of systemic racism become more dire. The U.S. Department of Education reports that, not only are Black students suspended and expelled a deafening three times more often than their white classmates when being punished over similar issues, but are also referred to police authority and arrested disproportionately in comparison to their white classmates.

This disproportionate referral to law enforcement forms the basis to the phenomenon we’ve come to call the School to Prison Pipeline. BIPOC already face disproportionate and unfair treatment in the prison and justice systems, and actively sending more Black and brown students to prison from school grounds only fosters these disparities. With the odds so frustratingly and irrefutably stacked against BIPOC students, many of them decide that they might as well drop out altogether. This becomes reflected, later, in the disproportionate graduation rates, as well.

For many students, moving on to college means a newfound sense of freedom. While Black students may very well break away from annoying curfews or other forms of parental micromanaging, they certainly aren’t guaranteed freedom from the racial biases that their academic institution and educators are bound to exhibit.

Black students, statistically, inherit more college related debt than their white friends. The academic experience is affected as well, as studies show that professors are more likely to call on and interact with students that have more traditionally white names. Whether this classroom preference is a manifestation of subtle racism or a professor’s shyness to attempt pronouncing a “different” sounding name (but we repeat ourselves), it belittles the importance of a Black student’s presence in the classroom. It’s an implicit message of who belongs in the classroom and who, for comfort’s sake, does not. Instances such as these can result in mental health issues in students that encounter regular, subtle (and not so subtle) displays of discrimination.

Professors aren’t the only group of people less likely to interact with Black sounding names, of course. The well-known phenomenon of resume discrimination—white-sounding names getting job interview calls more likely than Black sounding names—makes the disproportionate debt inheritance just that much more dreadful.

Suppose that the School to Prison Pipeline is rightfully dismantled, suppose that Black students aren’t arrested disproportionally on school grounds, suppose that Black toddlers aren’t much more likely to be expelled than white toddlers—suppose that implicit biases aren’t a problem in our education systems. Even then, racism plays an integral part, and it has everything to do with our curricula.

In our history classes, in our science classes, and in our literature classes, important, significant, and quintessential historical figures all seem to share one overwhelmingly common characteristic: they’re white. This, of course, isn’t an infallible truth, but it’s true enough to have very real effects on the educational experiences of BIPOC students.

Presenting historically and scientifically significant advances and innovations as predominately white implies that innovations by BIPOC are secondary, and less than fundamental in both the contexts of national and scientific progress. This, in turn, can project onto BIPOC students that their dreams and aspirations are less important, or less likely to come into fruition. There are more than plenty of significant Black and brown stories to be told that span a variety of different areas. For every first white man in orbit, there’s the first Black women that crunched the numbers to get him there at all.

Racism isn’t just a slur caught on camera, and it doesn’t just happen in headlines. Racism invades every corner of our lives, including our textbooks. Fighting for social justice and liberation happens in marches and protests, but it also happens in our schools and in our classrooms.

See how Adaptivex is helping school districts to counter systemic racism. You may also be interested in learning more about Culturally Responsive Teaching. Please contact us if you have any other questions or concerns.

How Students Can Benefit From Testing Solutions
August 21, 2020

What is Culturally Responsive Pedagogy?
August 21, 2020

What Is Culturally Responsive Teaching and Learning?
July 31, 2020

Unschooling: What If Students Directed Their Own Learning? By Lacrecia Terrance
May 6, 2020

3 Ways for Educators to Reboot and Level Up Practice During COVID-19 | Culturally Responsive Teaching
April 30, 2020
Go to Top