What is Culturally Responsive Pedagogy?

You are here:
Culturally Responsive Teaching 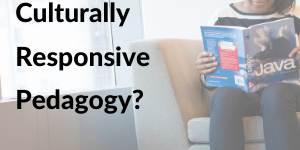 Current and recent events that fill our timelines and headlines are doing a great job at reminding the world about what BIPOC have been asking for all along: “Why are we note having conversations about race?”

As important as it is to show solidarity and support, whenever a new movement pops up or an old one resurfaces, it also isn’t enough. The heartbreaking events that seem to never end aren’t isolated instances, but rather perfectly natural consequences of a system embedded with racism. Fighting racism then, being actively anti-racist, includes confronting microaggressions in the produce aisle, but it doesn’t stop there.

The term “systemic racism” seems to pop up everywhere, and this is because it describes the nature of the problem: again, we don’t observe isolated acts of racism, we observe racism as an integral part of the system. Being anti-racist, then, has to also include entire overhauls of the system, from how we look at justice to the systemic racism in our education system. Culturally responsive pedagogy, in a sense, is a response to this call to action, and addresses more issues than race alone.

Pedagogy, in general, is defined by Merriam Webster as the art, science, or profession as teaching. To paraphrase, it is how we impact our knowledge on others, from a philosophical standpoint to a practical one.

As we discuss here, our curricula and both teaching and evaluation methods are not only whitewashed and far from representative of the diversity in the topics we already do discuss, but also aren’t attractive to or approachable by the diverse groups of individuals that we want to teach. This presents issues that range from a general disinterest in the content to a complete lack of inspiration, or a belittling of the dreams of BIPOC and non-male students who don’t see themselves represented in historical or scientific accomplishments.

Another issue faced is that curricula and evaluations are often tailored towards a specific demographic. This is, the content, method of teaching, and resources required in any given course may very well be designed assuming that students have spoken English their entire lives, have ready access to a computer or to the internet, have as much time as others to actually do the work, don’t have to translate for their parents at parent-teacher meetings, or don’t have to worry about college or even high school being a critical financial risk for their family—just to name a few. A blindly presented curriculum and evaluation standards will not evaluate each student equally and will not reach each student in the same way.
Culturally responsive pedagogy is the theory that all of these factors, and more, need to be taken into account when teaching. It is not enough to simply present information if the information is far from tailored to be received equally by everyone.

We dive more into specific descriptions here and examples here, but in short, it’s about representation and inclusion on a practical, meaningful level.

Diversity is a staple in both our everyday lives and in our history, and our classrooms should recognize that. Black people have played a fundamental role in the advancement of society and technology throughout history, not just with peanut butter and not just in February. Women got us much further than just to the moon, and that doesn’t only matter in March. Restricting representation to a few celebrated time periods frames the message that achievements by BIPOC, and by anyone who is not man, are novel and rare when, in fact, they are fundamental and everywhere.

Making sure all students are able to not only receive the education but are also able to be evaluated on it fairly, is a fundamental part in making sure everyone is given a chance, not just those with the privilege to have plenty of time and resources to do so.

There is a lot of work to be done, and an overhaul of a systemically racist education system is not going to happen overnight, but culturally responsive pedagogy is more than a fine place to start.

How Students Can Benefit From Testing Solutions
August 21, 2020

What Is Culturally Responsive Teaching and Learning?
July 31, 2020

Unschooling: What If Students Directed Their Own Learning? By Lacrecia Terrance
May 6, 2020

3 Ways for Educators to Reboot and Level Up Practice During COVID-19 | Culturally Responsive Teaching
April 30, 2020
Go to Top